The Many Woes of Ping – A Llama Survival Story – Part 2 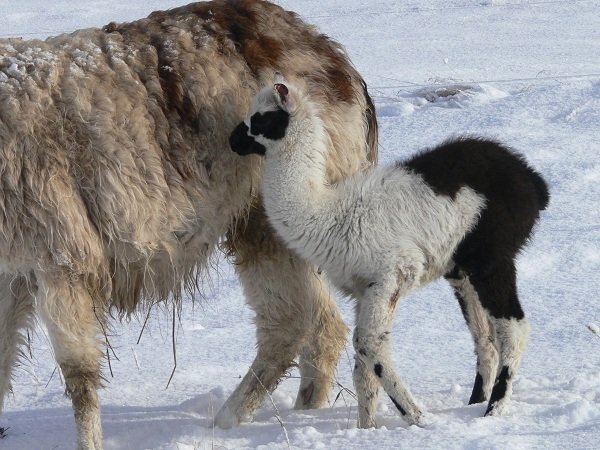 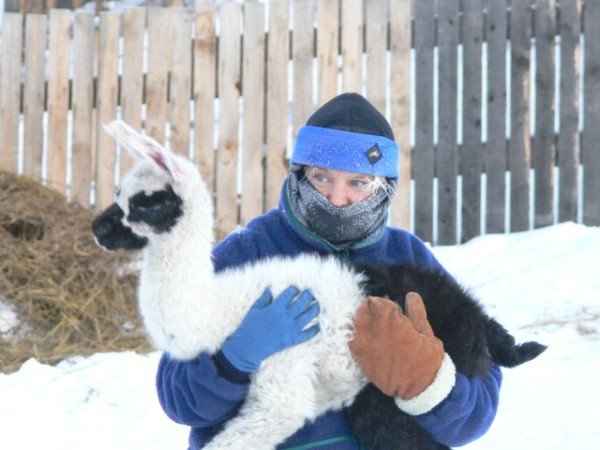 ….continued from Part 1 of The Many Woes of Ping

Unfortunately, Pings ears didn’t fare as well as her lungs. The upper 4 inches of each ear was so badly frozen, they never recovered. The ears cracked and bled and our repeated attempts to create hats and ear-warmers were not welcomed by her or the rest of the 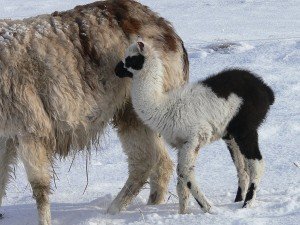 herd.  So desperate was Ping to rid herself of the many fluffy, fleecy or woolly contrivances that she made her ears crack and bleed even more. Honey and vitamin-E oil eased the pain a little, but she refused to wear a hat. For reference however, the most successful hat was made from the leg of a nylon stocking stretched over the head, holding a pad of her mother’s fibre over each ear. Un-sexy and zero street-cred, but definitely warm!

Without the upper portion of her ears, she no longer has protection against rain and snow entering her ear canals, neither does she have the fly swats to keep the beasties out of her ears and eyes.  We’re looking into piercing her ears and equipping her with tassels for the summer months though! 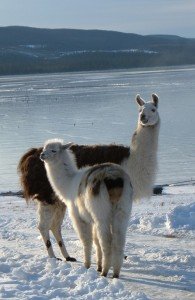 After ten days of restrictions, Ping was getting pretty lively in the tiny studio, which served as our office and workroom.  Our main living quarters and bedroom at the time, were in an old trailer parked in the attached barn.  Dark and cramped as it was, the trailer almost reached the level of cozy, with hot air being piped in from a wood-fired stove enclosure.  Jack Frost had also eased his icy grip on the region and Ping was re-introduced to the herd, requiring another round of poking, sniffing and snorting from the other llamas.  Ping’s mother, SoDah, was still having discomfort with her udder and was often unwilling to allow Ping to feed.  Consequently, we had to continue regular feeds from the bottle, which Ping was no longer keen on, having tasted the real thing!   The milk supplement was powdered goats milk, llama milk being unavailable as a supplement and …well, llamas aren’t very milkable!

Llamas and alpacas have small internal udders and their milk is much lower in fat content than that of a goat.  When the cria is suckling, she will usually only spend a couple of seconds on each teat before moving to another.  One small squirt from each teat is all that can be obtained at each suck, so they move on to allow the teat to recharge.  This sometimes gives the impression that the baby llama is not managing to feed or that the udder is dry.  Don’t bother trying to milk a llama by hand, it’s not worth it, even if you can get her to stand still long enough to try!

Although low in fat content, llama milk is extremely rich in calcium and other minerals and this may have played some part in the next drama.  A few more winter weeks passed, with Ping apparently growing bigger and stronger.  One day however, she started limping.  On 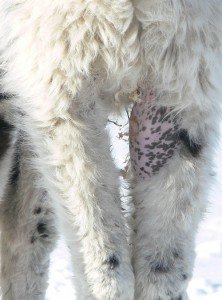 inspection we found a swelling at the very top of her front left leg, only a couple of inches from the shoulder.  It was obviously causing her considerable pain and we urgently needed to find out what was going on with that leg.  Living in a very remote area of BC, the nearest vet was almost three hours drive and a ferry journey away and that vet did not have the necessary equipment to examine large animals.  There was nothing for it but to put her on the back seat of the pick-up and drive her the extra hour and a quarter to the NVAHS.

Ping was a huge hit with the wonderful staff at this rural Animal Hospital, sadly though, the results of the x-rays were not good.  Ping had sustained a broken leg shortly after being placed back with her mother and she hadn’t made a murmur about it. She hadn’t limped or complained or shown any signs of distress. If I so much, as scrape my shin, the whole world is going to know! …but not Ping.   Llamas are renowned for their stoicism.  A rather unsettlingly prophetic saying among llama breeders is ‘You only know you have a sick llama when you find one dead in the yard.’

A broken leg isn’t so bad, even one that has repaired itself without intervention, but Ping had a severe bone infection, indicative of bone sequestration.  New bone had grown around the damaged bone, walling in the infection.  The break was very close to the head of the femur and inoperable.  She was referred to the Veterinary College at Saskatoon, but they announced that she had a less than zero percent chance of survival with sequestered bone.  Although they had experimented on an alpaca with the same problem, giving him massive doses of antibiotics, these might not work and would likely cause major problems further down the road.

After all we had been through, I was not going to give up on Ping and truly appreciative of all of the help the vet staff had given us, I loaded Ping back into the truck, with little but hope and determination. 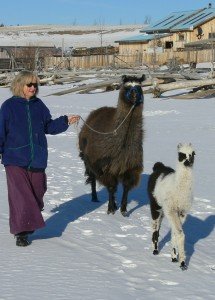 Ping Leading Us on a Walk Along the Frozen Lake

We were provided with a powerful antibiotic, which might slow things down a bit, giving us a few extra days to find a solution.  The solution came from our friends in the homeopathic community and the little white sugar pills worked a kind of magic on Ping that most people would find hard to believe, in fact, the closed-minded critics of homeopathy would have us believe that it couldn’t possibly have achieved anything except wishful thinking.  Let me tell you something though: it took eighteen months for Ping’s leg to completely heal.  It would suppurate vast quantities of pus and then it would stop.  When it stopped, Ping became ill with pain.  Within a day of giving her another dose of her remedy, the abscesses would re-open and she would be running around again.  When you witness this kind of event over and over and over, you begin to realise that it isn’t coincidence and that you are seeing a direct response by the body to the homeopathic remedy.

Three years later, you cannot even see a scar on her leg …but Ping had yet more to suffering to cope with. 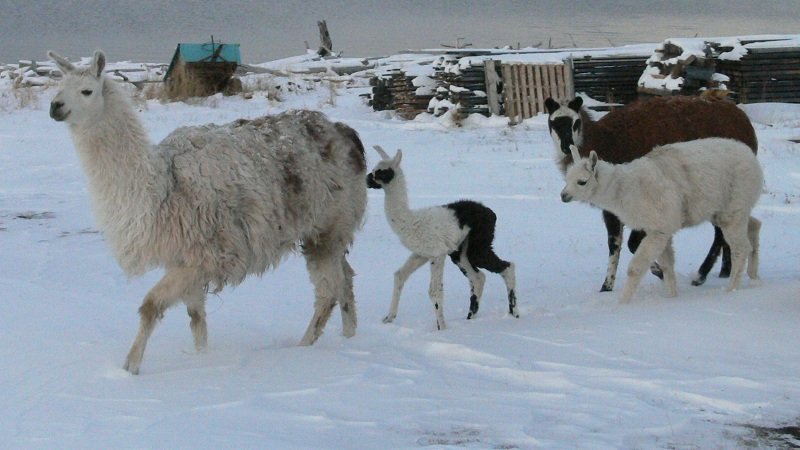 Ping Rejoins Her Mother and The Herd

Although we lived in a remote and stunningly beautiful piece of paradise, as you might see in some of the photographs on this site, there are some people who choose to live remotely for reasons very different to our own.  One particular person objected to us living there and campaigned long and hard to remove us from the vicinity, wanting it all to himself perhaps.

We endured many trials and tribulations as a result of this persecution, but maintained a brave face until one day, two of the llamas didn’t come down from the top field with the rest of the herd.  SoDah, Ping’s mother was found in the corner of the field with one of her legs badly damaged.  The bone had been shattered by some means and the leg was literally hanging off.  The missing baby had obviously been severely traumatized by something and was running around in a state of absolute terror in another area of the field.  He was also covered in blood.  They were probably standing side by side as SoDah fell from the blow.  SoDah needed emergency treatment and since no vet would travel to us, we had to remove her to the vet.  Whilst we were strapping her leg and loading her into the stock box on the back of the vehicle, the sick man who perpetrated this act drove across the field and parked close by, just watching us.  We have one man to thank for our restraint in that moment: Mahatma Gandhi.  Violence begets violence; war begets war.  It takes far more courage to turn away sometimes.

The rest of the day was just as traumatic.  Not only did we have the four hour journey to the vet once again, but a random police vehicle check delayed us for even longer, because we were carrying livestock.  The vets were shocked by the x-rays of SoDah’s leg.  At first they suspected gunshot and asked if we thought that possible?  On closer examination though, the injury appeared to be so violent in nature that even a gunshot couldn’t have achieved it.  This was no accidental break, she had been bludgeoned.

Sadly, even homeopathy couldn’t restore SoDah’s shattered leg.  Perhaps we could have tried for amputation and a prosthesis. That remains in the bag of ‘what if’s.’

Ping was now a few months old with a severely injured leg, weak lungs, no ears and no mother.  If you visit the sanctuary today though, Ping will probably be the first to come and say ‘hello’ to you and her own baby, Kazuko, will likely be the second!

Thus we find ourselves now, surrounded by truly wonderful people in our new home in the North Okanagan region of southern BC.  We have left behind all that we lived and worked for in the north, to start again from scratch.  There comes a time when we have to cut loose from the untenable and unbearable.  Although we miss the crisp air, the blue skies and constant chatter and encouragement from the huge lake, I have to admit that shopping 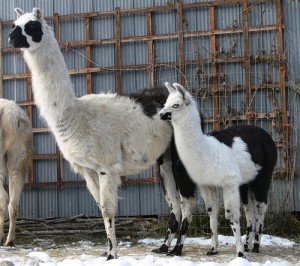 is somewhat easier, living only twenty minutes from town.  It’s also considerably easier taking the animals to see a vet, in fact the vet comes to see us!  In this more populated region we can run regular fibre arts workshops to raise money for the sanctuary and we hope to be in a position quite soon, where we can create a wonderful new visitor centre, allowing other people to come along and share in the company of these delightful animals

…and for your interest, the name ‘Ping’ means ‘Peaceful’ in Chinese and ‘Kazuko’ means ‘Daughter of Peace’ in Japanese; permanent reminders of what we want and what we are prepared to stand up for in this wonderful world of ours!