The Many Woes of Ping – A Llama Survival Story – Part 1 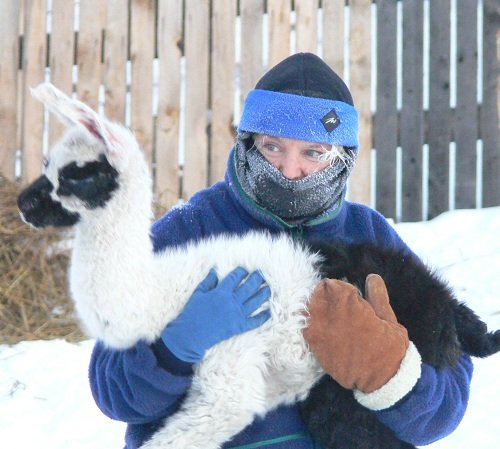 Although this story has previously been posted on our fibre arts blog www.fabinbc.com it rightfully belongs here amongst the llamas.  All of our llamas have a story to tell, but perhaps none more painful and tragic, yet more inspiring than that of Ping.  This is Ping’s story: 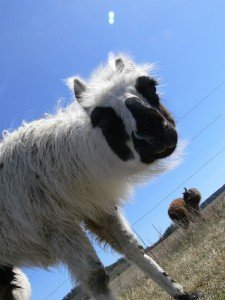 Winter in central BC had been incredibly mild and despite several dumps of snow, nothing had stayed around for long and the grass continued to grow allowing the Llamas to continue to graze the cut oat field.  Then one Friday in December, winter arrived with vicious winds blowing straight out of the Arctic, making minus 16 degrees C feel more like -27.

Fine powdery snow arrived horizontally, drifting around everything and hampering any attempt at movement.

…….and SoDah chose THIS day to bring into the world her first baby!

Of course, she couldn’t have the baby in the cozy llama house and hay shed.  Llamas prefer to be out in the open for such events. Luckily, the writhing wet mass was spotted within a minute of landing in the snow and was rushed into the hay stall and wrapped in blankets and towels.

The spiteful wind found every chink in the woodwork and opening eyes in the blizzard was painful at times. Cardboard and blankets were quickly stapled to the walls and the generator dragged to the hay stall to power a hair dryer to assist in fluffing up the coat. 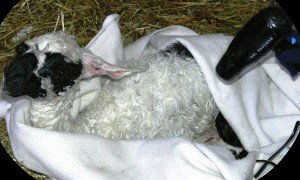 The cold was so savage though, that even the hair dryer couldn’t out-blast the storm. Our little winter cria was then bundled up and rushed to our work studio to dry in front of the furnace.

After an hour of heavenly warmth and having learned the art of standing up, she had to be returned to the stall with her anxious mother for the all important colostrum feed.

The tempestuous weather continued the following day with the air temperature dropping to to the low twenties and the windchill around minus forty, so mother and cria remained confined and frequently monitored. Unfortunately, due to the freezing conditions, SoDah wasn’t able to feed her baby on the second day and once more she was hauled indoors for a bottle feed as she appeared weak and was constantly shivering……hardly surprising really!

We are not great advocates of interference, but at this stage tube feeding had to be 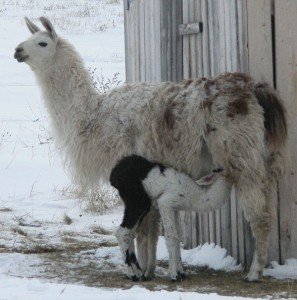 considered as the baby would not take a bottle. We gave SoDah one more attempt and THANKFULLY she allowed her baby to feed, perhaps due to the anxiety of absence.

Unfortunately, at some time during the proceedings, the cria’s ears succumbed to frostbite and hung limply. This is always a danger with newborns in winter here.  If only she had been born the day before, she could have enjoyed warmth, sunshine and grass. I have read that Llamas choose the best time and weather to give birth…… not this time though!  ….and the baby’s name? Pinguino seemed appropriate – evenly marked black and white – our own little penguin! 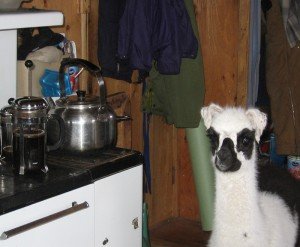 Ping seemed OK for a few days, but the same day as her frostbitten ears flopped, she started a disconcerting wheeze and chest rattle; she had lost weight too, down about 4 pounds from her 29lb birth weight.

Pneumonia had set in.

Hauled once more into the warm studio, Ping was provided with a large cardboard box, which she quickly decided was not suitable for living, but perfect for a toilet.

Llamas are incredibly easy to house-train, preferring to have one small area set aside for a toilet. As soon as she stepped through the little door made in the side of the box we could hold a bucket under her back end and catch all the produce.

The Oldest Remedy in the Book – Urine

At her first squatting, we swooped an old saucepan under her to catch the urine and added about 3cc of her urine to a bottle of milk. A 330cl beer bottle is the ideal vessel for milk feeding; plastic bottles collapse under the phenomenal sucking power of a cria! Lamb-feeding teats are readily available from feed stores and fit the beer bottles snugly.

Getting a new-born llama to feed from a bottle is a trial of patience, but knowing that a baby animal usually needs darkness to start feeding, we invented a series of devices that pretended to be mummy! Sticking the bottle under an armpit with the teat barely showing 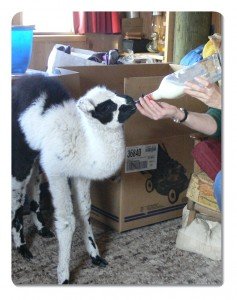 started the ball rolling. Ping pushed her face into the warmth and darkness of David’s sweater and was ….. eventually, happy to feed.  Later, we contrived a feeding station in the form of a couple of sticks, taped to the corner of the cardboard box and used the sticks to support the sleeves of the sweater, with which Ping had become familiar.  With the sleeves pretending to be legs and the teat protruding slightly from between them, feeding usually commenced after only a minute of poking around.

Once Ping was used to the bottle feeding we only had to place a hand over her eyes and she would take a bottle.

Ping was urinating hourly and for the next six hours we would catch her urine and feed 2 or 3cc back into her bottle ready for the next feed. 2cc of ionic silver was also added to every other feed to support her weakened immune system.

In less than 24 hours the snuffling, croaking, rattling breath and distress of the pneumonia had vanished and Ping was back on her feet and full of llama bounce! 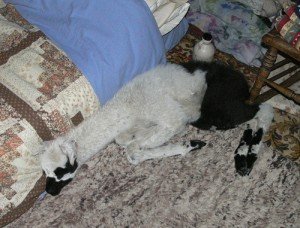 We decided to make up a bed on the floor of the studio and spent the next 10 days sharing the room with Ping, attending to toilet and feeding at 2 or 3 hour intervals throughout the night. Each day she was taken back out to SoDah for milk and bonding, but the bitterly cold weather continued, with temperatures in the region plummeting to -38 C. Ping spent most of her time indoors until she had regained her birth weight and was fighting fit and ready to face the Big Bad World outdoors.

Unfortunately, Ping’s troubles were only just beginning and within a few weeks, Ping was given a ‘less than zero percent chance of survival,’ by some of the most experienced vets in Canada.  ….continue reading Part 2 of  ‘The Many Woes of Ping’  %%awsomnews1%%