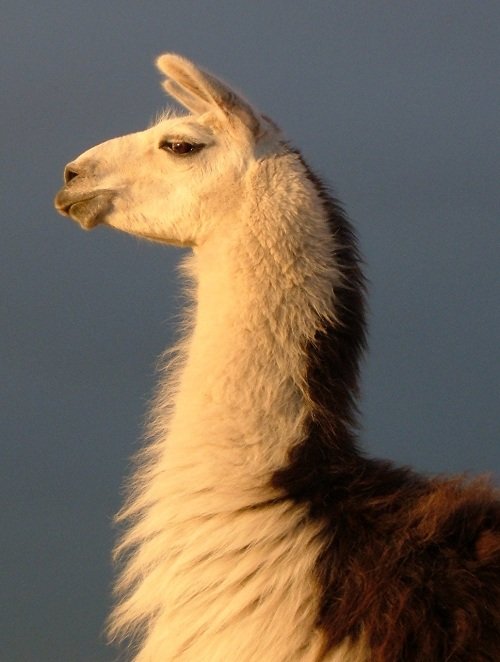 Death of a Llama

Losing a companion is always distressing and can even be traumatic, especially when deep bonds have developed between human and animal.  People who have not experienced this deeply spiritual and immensely powerful bond might find it difficult, if not impossible to comprehend the level of interaction possible between species.  Dian Fossey

sticks in my mind as a person who exemplified this interspecies connection.  She spent much of her life living with and studying gorillas in Africa.  Her book ‘Gorillas in the Mist’ is a must-read for anyone hoping to learn more about connecting with animals.  The subsequent film is also a very moving tribute to her work.

This last year has been particularly traumatic for Lynne and I, losing not one, but three of our llama companions.  Two of the losses were particularly painful since they had to do with decisions that we made concerning their health and we have gone to considerable lengths and considerable expense to learn what we can from our experiences and do what we can to ensure it does not happen like that again.

A pretty young male, affectionately named Fizz, developed a swollen jaw.  As all llama and alpaca owners are aware, lump-jaw is a common affliction with camelids and is seldom serious.  Most commonly, a lump on an animals jaw is caused by an abscess around a tooth, most likely due to a sliver of hay or a thorn being worked deep into the tissue.  Some people treat the abscesses with antibiotics, our own method is to prescribe a course of homoeopathic silica, which gently encourages the body to expel the foreign object and 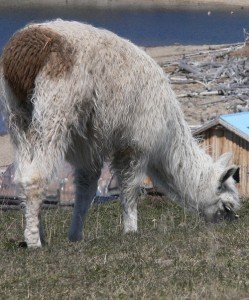 allows the body to heal naturally.  Fizz didn’t respond the this treatment and his jaw continued to swell.  After trying several other treatment options, including the antibiotic route, the jaw continued to increase in size and distort.

The vet declared it to be osteomyelitis, translating as chronic infection in the bone.  He also offered the same diagnosis for our elderly head-of-the-herd, TomBurke.   The only treatment, we were advised, would be a large dose of potassium iodide, administered through IV.  The homoeopathic remedies we had tried to deal with the infection had failed to yield results thus far and in our over-keenness to see results, we agreed to the aggressive treatment.

Poor Fizz did not want the IV.  Normally an incredibly placid animal, he was manic in his effort to avoid the treatment.  Within thirty six hours of receiving the potassium iodide IV, Fizz was dead.  TomBurke endured the IV in the jugular with his usual stoic demeanour.  Within hours he was also critically ill.  He became blind and unable to stand.  In the few additional hours we had to work with TomBurke, we discovered a homoeopathic remedy that matched his condition and he pulled through.  He survived another six months, but 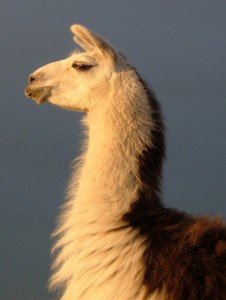 eventually succumbed to the deterioration in his lower jaw that prevented him from being able to eat.

Sitting beside him throughout the night, as he prepared to leave his ruined body and return home to spirit, I reflected on how much Lynne and I had learned from  Fizz and TomBurke, not only in our understanding of llama behaviour, but in emotional, psychological and spiritual terms.  I have a very simple, but powerful tenet in my life: ‘If you don’t learn something from every single situation in your life, then you are not listening.’

So, what did I learn from TomBurke?  Probably the most important lesson he brought to me, was to keep illness in perspective.  In spite of all of the pain, discomfort and inconvenience he endured, he continued to be the llama he has always been.  He was always the first to investigate a newcomer in the pasture, whether human or animal, even when he hadn’t eaten for three weeks.  He maintained his responsibilities as head of the herd, remaining alert for danger to the rest of the herd and he also retained his sense of dignity.  Even to the last day, if I wanted to catch him, I had to abide by his rules of engagement.  In order to do anything with TomBurke, I had to allow him to walk away from me and to stop when and where he determined.  Only then, could I halter him, give him his medicine, examine his jaw etc.  He needed to demonstrate to the rest of the herd that he wasn’t being caught, but that he was allowing me to touch him.  The distinction is important from a herd perspective and perhaps this lesson might be useful to other animal handlers. 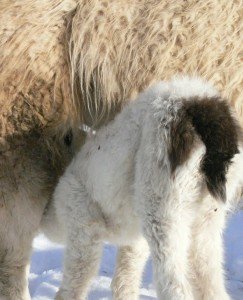 I must emphasize here that there is no blame to lay at anyone’s door.  The vet performed a routine IV treatment prescribed for many large animals.  Unfortunately, it was not appreciated at the time, just how sensitive camelids are to chemicals and drug treatment and in our experiences and observations, llamas and alpacas need lower doses than that prescribed for the pound weight of horses, cattle, pigs etc.

Secondly, Lynne and I have begun studies with the British Institute of Homoeopathy, in order to have a much deeper understanding of the homoeopathic treatment that we can offer the llamas.  There is so little known about treating camelids with this amazing holistic system, that perhaps it is time for us to pay back into society, by studying and cataloguing our many experiences with llama disease and homeopathy.

Thank you for the lessons TomBurke, for the pleasure of your company and for the moments of fun and mischief that will remain with us until it’s our turn to shed our skins. 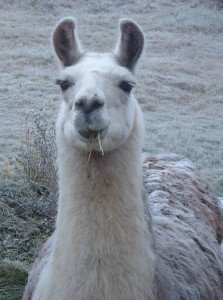 And, what lesson can we learn from Fizz, who fought so hard against having the IV.  It wasn’t that he hated needles or handling; he simply knew …..and he was right.  Our greater strength and determination won over and he had the treatment.  His behaviour was ‘out of character.’  That is probably the most important lesson I can ever take from any animal.  If the behaviour is out of character, ask yourself why?

The Llama Sanctuary is dedicated to caring for homeless, sick and neglected llamas and alpacas.  Financial contributions are warmly welcomed to keep this organization flourishing.  Please help … Just $6.75 will buy enough hay to feed a llama for two weeks.