Following on from yesterday’s post about sproinging, here’s another clip of some of the sanctuary llamas running together.

Llamas love to run and frolick. Playing games and racing is obviously related to developing escape and evasion tactics in the wild; keeping them from the jaws of predators.  People who believe that animals do not experience feelings or display emotions have obviously never had a close relationship with one.  Even so, llamas play when they are feeling happy and their favourite time of day to play is at dusk.

Not Playtime – aka Aberrant Behavior Syndrome

Young llamas also enjoy wrestling and the temptation to encourage an animal to wrestle should be strongly resisted.  Watching children tag and wrangle with a young llama may 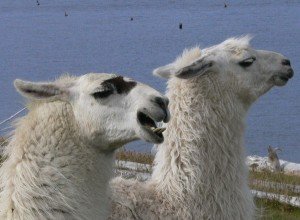 look cute and delightful.  As the animal grows and the hormonal flow increases, an over-handled llama can become extremely aggressive toward humans, as it attempts to become head of the herd, believing that the humans are all part of the herd!  Too many tales have been told of humans being flattened, trampled and seriously injured by llamas.  The so-called aberrant behaviour syndrome or berserk male syndrome, as it is sometimes known, is usually the result of an animal not being taught boundaries between humans and llamas at a young age.  Too much petting of babies and not teaching the animal that humans must be respected at all times, can lead to some terrifying situations.

From our knowledge, it is difficult, if not impossible to reverse this behavioral trait and the llama or alpaca …yes, those cute little alpacas can show the same aggressive behaviour as llamas, usually ends up being killed.  An adult llama is not an animal you want to play with, if it does not respect you! 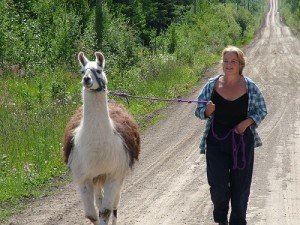 Llamas have also been used for pulling carts and even cart racing.  They usually run in teams of three, pulling chariots over long distances.  There seems to be very little information available concerning llama racing, but they certainly can be trained to pull carts and enjoy it!  The lovable llama who started the rescue sanctuary was an ex-racing llama from Quesnel, British Columbia.

Watch the short video and tell me they are not loving this romp!