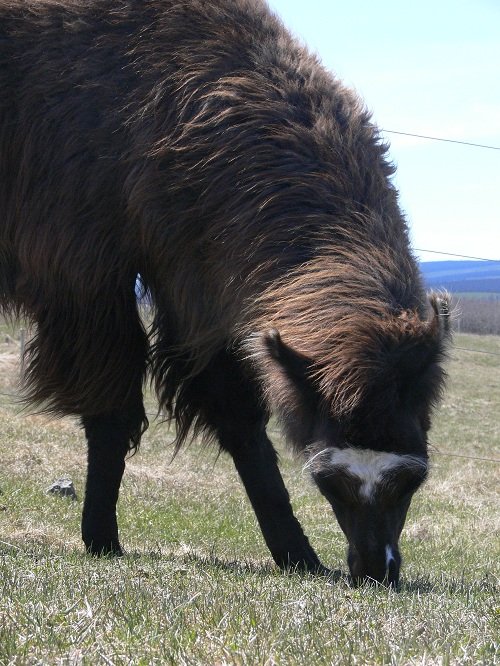 During the sixteenth century, Conquistadors invaded South America and slaughtered vast numbers of llamas, replacing these revered and worshipped animals with sheep they had brought with them from Europe. The few remaining llama herders were driven into the High Puna of the Andes with their ‘Silent Brother,’ as the llama was called, and there they remained, isolated and obscure, until rediscovery three hundred years later.  Llamas were introduced to North America in the late 1800’s for private animal collections and zoos, but 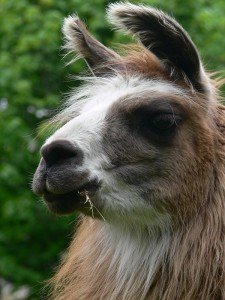 then in the 1970’s, they were introduced into Canada for their exquisite fibre coats and the breeding stock changed hands for huge sums of money.  In the 1990’s these delightful and highly individual animals were again disposed of in large numbers as the alpaca took over as the latest ‘Golden Goose.’

The unwanted llamas, that didn’t end up as dog food, found their way to many rural homes as pets and guard animals.  Sadly, many people were unaware of the special care that they required, believing that, since llamas are extremely hardy, they could look after themselves.  Whilst this may be true in the wilds of South America, the climate and vegetation of North America presents challenges for which they are not equipped.  Their toenails need cutting several times a year if kept on pasture and their coats need grooming or shearing.  If the food is too rich in protein, they become subject to many illnesses and parasites that they would not encounter in their native land.  Tragically, a great many of these animals have been neglected, abused or simply abandoned and most animal rescue centres are not able to cater for these unusual creatures.

Cats, dogs, horses and even donkeys have specialized rescue organisations and care homes, but what happens when a llama or an alpaca becomes homeless or neglected or is reported as being abused?   Even though there are thousands of llamas and alpacas in British Columbia, The Llama Sanctuary is one of only two specialised camelid rescue centres in the whole of Canada.

Situated on 21 acres in Kingfisher near Mabel Lake, The Llama Sanctuary is currently home to twenty nine llamas, many of whom have been rescued.  Llama lodging for respite, healthcare, retirement and boarding make up the rest of the herd.  Last week David and Lynne headed off to round up four more of these amazing creatures, providing them with food, shelter, healthcare and above all, the respect that they deserve.

‘There is no such thing as a typical rescue,’ said David, ‘each one has its own peculiarities.   Sometimes the animals have simply been abandoned due to a marriage break-up or property repossession.  Other times, the owner simply does not appreciate the care that the animal requires, resulting in neglect and untreated illness.  Our very first rescue was from someone who was terrified of the llama, which she acquired as a guard for her miniature bulls.  He was about to be collected and sent to the meat factory, when we got the call.’ 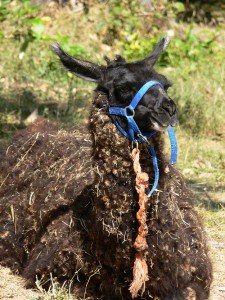 ‘Recently, three llamas were reported running wild around a vacant farm in the North Okanagan.’ David recalls, ‘After driving out to the remote location, the animals were found near some empty buildings.  The only fences were those of neighboring properties, otherwise the llamas had unlimited access to the surrounding area and they were literally plastered from head to toe with burdock.  Without access to winter feed and with severely compromised coats, due to the burdock, these animals would have starved or frozen to death.  We quickly discovered that they had no comprehension of food being presented in colourful pails, so enticing them with rolled oats was not going to work.  There were no corrals or fences to contain them and they were definitely not used to human handling.  Catching them was not going to be easy!  With a little ingenuity though, a lot of rope and the generous assistance from the neighbour, two of the llamas, a young mother and her four month old baby were captured and cajoled into the special crate on the back of the vehicle.  Apparently, a male llama had gone with a horse that had been removed a few months previously.’

‘The third llama, a young female, was in a state of absolute terror and forced her way through a high tensile wire fence before vanishing along a wide trail into the forest.  The only thing we could do was to sit back and wait for her to return.  Sure enough, an hour later she emerged from the forest, seeking her companions.  Stalking an extremely agile and intelligent animal requires much patience, but luck was on our side and we eventually found her in a corner of a neighbours field.  Unfortunately, she made another desperate bid for freedom by attempting to leap over the high tensile steel fence.  This time she failed and ended up sickeningly suspended by her hind quarters from the taught wire.  It took a painful minute to secure a halter and lead rope on the thrashing animal and a bit of bruising as repayment for extricating her back end from the wire, which could so easily have sliced through her flesh.  Thankfully, she appeared to be unharmed by the incident, but she was demonic in her continued efforts to escape.’

‘A bucking llama is in grave danger of suffocation if the halter is not correctly fitted.’ Explains Lynne,  ‘Llamas are obligate nasal breathers and a poorly fitting halter can easily slip down off the hard bridge of the nose onto the soft gristle of the snout, which collapses, cutting off the air supply and causing further panic.  Once this happens, it’s very difficult to remedy before the animal collapses.

Eventually, the terrified animal was secured to a tree in a garden with food, shade and water to sustain her until she could be collected the following day.  She was simply too wild to ride with the other two in the stock crate.

The next day David and Lynne returned to collect the young female, who was still in a frenzied state.  This time they were prepared with a special homoeopathic formula of Aconite, Arsenicum and Arnica, which was squirted up her nose using a syringe.  She calmed down instantly and after two more doses, she was calm enough to be untied and 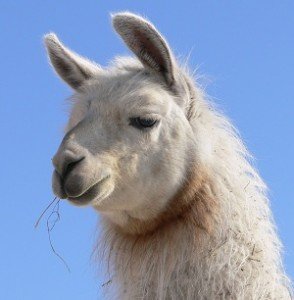 carefully manoeuvred into the vehicle.  ‘We always travel prepared with Bach Flower Remedies, but these had little effect on this poor girl yesterday,’ said David.

The three young llamas have since become the best of friends with an elderly male, who arrived the same week, after the owner tragically died.   They will require a lot of attention to clean their coats before winter arrives, but the first task is to get them used to human handling.

‘Many of our animals arrive in poor health and require a great deal of specialised care,’ explains Lynne Milsom,  ‘Llamas are extremely sensitive to their environment, as well as to aggressive pharmaceutical drugs.  Homoeopathy, together with other energy remedies have proven invaluable in their healthcare programme.’

To help pay the ever mounting bills at the sanctuary FAB Fibre Arts Bootcamp in BC was created.  Using fibre from the llamas in the sanctuary as well as other donated and

purchased natural fibre, Lynne and David run regular workshops for the whole family covering a wide spectrum of the fibre arts including: creative spinning, dyeing, felting, fibre processing, and their own unusual brand of fibre work called Mega Knitting and Mega Crochet.  They also manufacture huge knitting needles and crochet hooks as well as other fibre arts tools and equipment, all to pay for the rescued llamas.

Generous donations from people who respect the animal kingdom, help enormously and it was with this in mind that they attended the IPE 2012 exhibition in Armstrong at the end of August.  This five day event resulted in seven more animals being rescued, but sadly less than $100 in donations.

The Llama Sanctuary is desperately trying to raise $10,000 to pay for additional shelters, fencing, feed and healthcare for this coming winter.  The rescue centre also requires larger premises suitable to cope with the ever increasing numbers of unwanted camelids.  The current sanctuary premises does not allow for casual visitors, but with plans in the pipeline to greatly expand the fibre arts side of the operation as well as offering a camelid healthcare clinic, the perfect property is being sought to establish a truly unique tourist attraction.

It is a sad reflection on our society that money rules over animal welfare.  The alpaca usurped the llama as the great road to riches and now it looks like the alpaca is heading 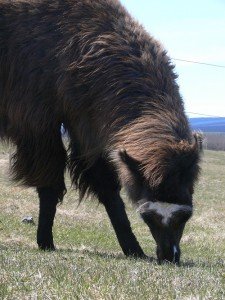 the same way as the llama as guanacos are being heralded as having the best fibre.  Already, The Llama Sanctuary is receiving calls about alpacas in need.  ‘Llamas have beautiful coats and so do alpacas,’ explains Lynne, ‘Their fibre need not become less valuable, just because someone says there might be something better out there.’

Finally, the question that is everyone’s mind – what’s it like to be covered in llama spit every day?

‘Wiping chunks of stinking regurgitated goop from our faces might seem like an occupational hazard,’ David laughed, ‘but at The Llama Sanctuary, being spat at by a llama, even a highly traumatized llama, is actually a very rare occurrence.’

‘Llamas have certainly become legendary for their propensity to spit and if we received a dollar for every time someone asked us about llama spitting, we would be well on our way to raising the $10,000 we need.’  Apparently, not as much as a dribble was recorded during the last four rescues.

Lynne concluded, ‘Of course, llamas and alpacas certainly can and most definitely do spit, but usually it’s due to a territorial squabble between two animals or an argument over food.  Getting in the middle of an argument is sure-fire way of receiving a mouthful of masticated grass in the eye, and yes, it certainly does stink!’ 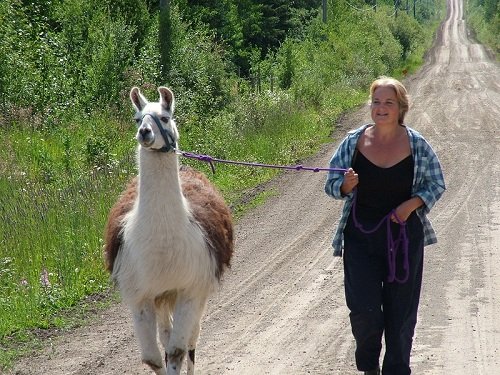