How To Catch A Llama 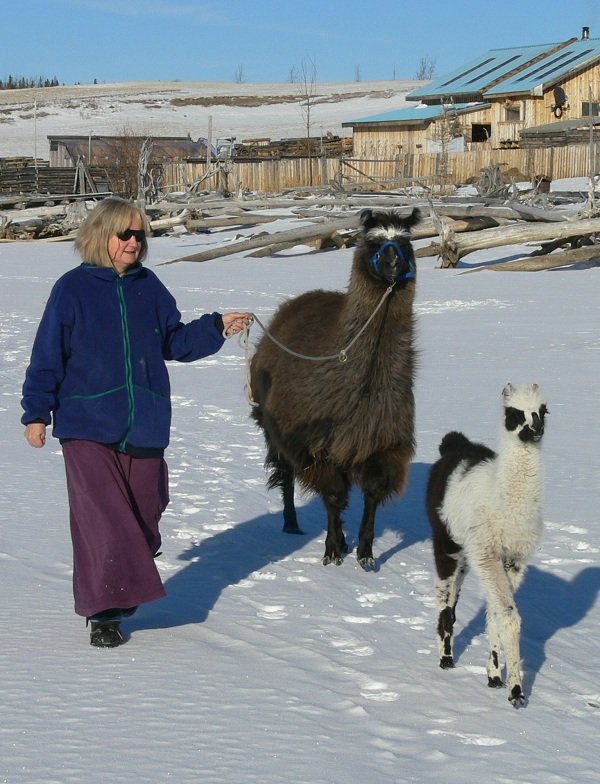 This post was first published in 2008 on our old website, but the lessons we learned and shared then are still as relevant today and worth sharing here, especially with those who have newly acquired llamas or are considering welcoming a few of these majestic beasts in their lives.

The other day we received a salutary reminder of the kind of raw, aggressive power a llama can command. 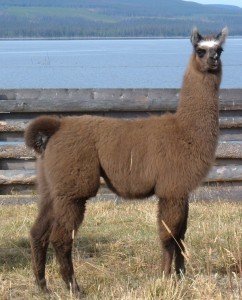 The animal in question is a 2 year old stud (sometimes referred to as an uncut or intact male). Recently our focus has been almost entirely on Bella, who suffered a serious leg injury and is recovering from major surgical repairs. Bella is the epitome of the calm and easy going camelid and over the last few weeks has lulled us into a false sense of security with regard to llama handling.

We were shocked back into reality when dear, fluffy little Cuzco turned into a large, boisterous stud, apparently overnight.  Whilst tending to Bella in one of the Llama houses a great ruckus started outside and on dashing outside found Cuzco reared on his hind legs, reaching to a height of 8 or 9 feet. The gate yielded to his power as he 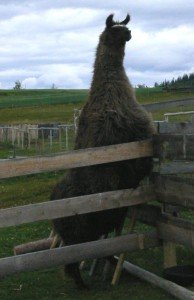 crashed down onto it a few times and having created the entrance he sought, he charged into the adjoining paddock to accost two other males – Tom Burke, the head of the herd and a sire called Hagar.

Until very recently he had happily shared the paddock with Tom Burke and was moved out into his field of his own before his games for dominance became serious.

Generally, llama and alpaca males, whether intact or castrated, will happily live together without any major problems.  Of course, they still challenge one another and enjoy wrestling and chasing each other around the field.  That’s all part of normal, healthy behaviour, and as long as their curved fighting teeth have been blunted, they seldom hurt each other.  These are llamas, after all, and we should not expect them to comply with our rules of acceptable human behaviour, not that humans behave much differently!  Running around and wrestling keeps the boys fit and healthy and their antics are a pleasure to watch ….usually.

Unfortunately, when the youngsters start to grow into adults and the testosterone begins to 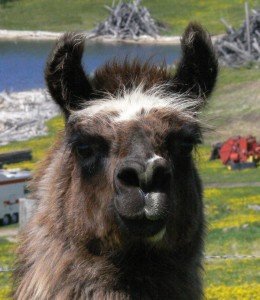 When two male llamas are fighting…and I mean REALLY fighting, it’s best not to get between them. Luckily for us Hagar isn’t a wild woolly heap of testosterone laden muscle like Cuzco, he’s actually badly crippled, but a survivor nevertheless, which has made him more of a tactician than a fighter. He has learned to avoid the thrusts and charges of his opponent and wastes little energy until he finds the perfect moment to bring him to his knees.

Just as in humans, the surge of male hormone makes the animal want to be chief, which means he has to beat the current title holder into submission. Tom Burke is Commander-in-Chief and is about as big as a llama gets – at least 450lbs and well over 6 feet tall and despite being a peace-keeper, he still knows how to move.

After 10 horrible minutes of watching this male mayhem, Cuzco finally quit and dropped to his knees in the dust bath, breathless, mouth agape and drooling from the all the spitting and his head had been redecorated with a stinky shade of green slime. 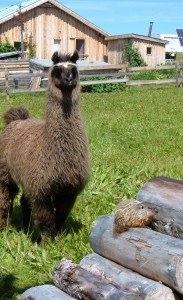 Lesson number two: Don’t try this at home folks as I can vouch for the fact that this technique doesn’t work on a 2 year old male in a tizzy. In my madness to get a rope and halter onto the young lad, as he sat on the ground, gasping for air,  I flung myself across the back of his neck, believing that this would immobilize him….. well, it’s worked in the past!   I was just turning to slip the rope around his neck when he launched himself onto his feet and sent me into orbit.

Brushing the dust off my bruised ego and kissing my battered knees better, adrenaline subsided, sanity returned and the tried and trusted method for catching an animal that doesn’t want to be caught slipped back into my thought processes.

How to catch a Llama (presuming a chute and catch-pen isn’t an option) – Tie a long length of brightly coloured rope (ours is about 80 feet long) to a post at or close to a suitable corner of the paddock.

The rope should be tied about waist height and one person should hold the free end loosely and stand about 45 degrees to the corner. Another person then calmly directs the roguish camelid into the corner using a couple of long wands (6 foot willow branches work well). As the animal nears the corner or tries to cross the rope, it’s pulled taught , which usually steers the animal back to the fence. Both people slowly move into the corner, making all the right reassuring noises  …la la la la   ….and the lead rope is secured around the neck.  Fitting the halter is a doddle once you get this far…. sometimes!

A point of note here: the lead rope should not be a cinch or noose.  If the animal tries to escape with a noose around its neck, the ever-tightening rope will send the animal into a panic, with potentially fatal consequences.  Our lead ropes have metal rings knotted into them, about eighteen inches from the clip on the end (see picture below).

Cuzco – Calms Down and becomes a wonderful companion ….and a father

Getting the lead rope onto a llama will have to be the subject of another post, as will fitting the halter correctly to prevent serious injury or even death!  The halter absolutely MUST fit properly, especially in this type of frenzied situation.

Lesson number three: Short and sweet, but really sound advice – if you don’t have need for a stud, then castration can save a huge amount of hassle and sore knees for you and save a lot of trauma for the whole herd.  However, we have several intact males that happily live together and playfully wrestle every day, without injury.  Cuzco was a very unfortunate exception and we suspect that he was a borderline case of Aberrant Behavioural Syndrome, also known as Berserk Male Syndrome.  He came from a family, which allowed a young child to wrestle with the baby llama and ride on his back.  Creating this level of familiarity between man and llama, when the llama is at his most impressionable age, sometimes leads the animal to see humans as equals and competition for the females in the herd!

Today, Cuzco is a calm and playful animal.  He has developed his rearing skill to the point where he can dance around on his hind legs for a minute of more, snorting his challenge to the other males.  Unfortunately, he’s just one of those creatures that’s always getting into trouble in one form or another …but more of that another day!