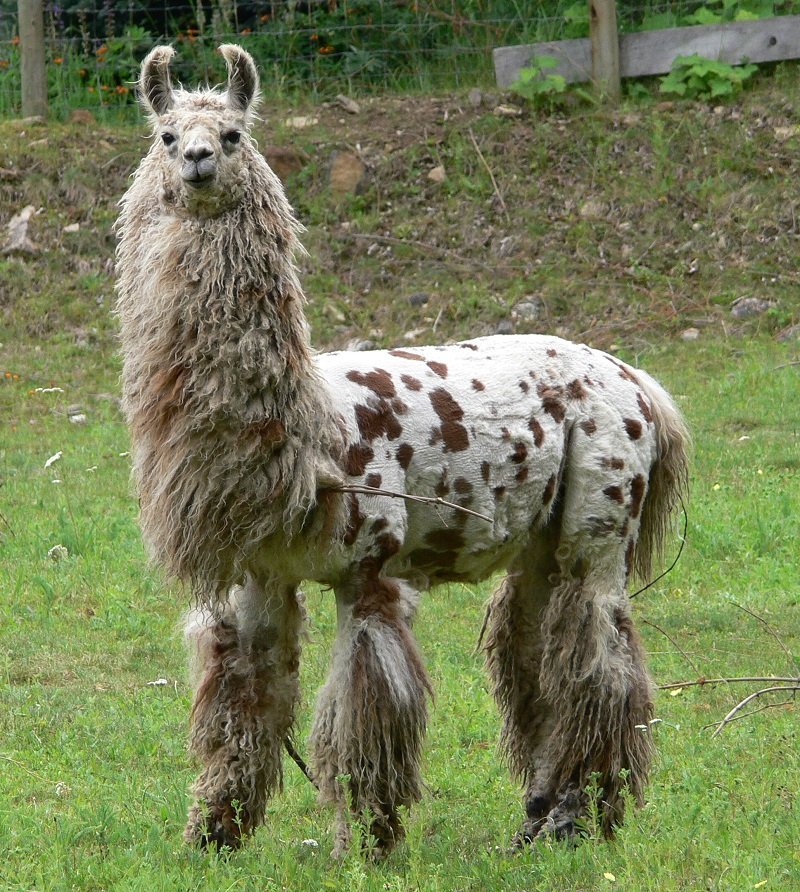 It seems somewhat incongruous to me that the institutions, which constantly beat the drum of safety consciousness and have created hundreds, if not thousands of safety committees to monitor our every footfall, also appear to be hell-bent on making war ….but 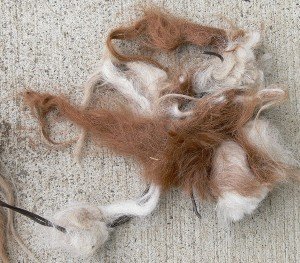 that’s another story.  Safety consciousness is something that needs to be taught, not just to the youngest members of society, but to the older generations too.  I remember as a child passing farm after farm, filled with rusting hulks of expired machinery and even playing inside these machines at times.  The farms were frequently surrounded by miles of ramshackle fences and I developed the impression that farmers were a scruffy bunch, with no care for appearances.

Much water has flowed under the bridge since those youthful days and I have, by some strange mechanism called life,  joined the ranks of land-workers and taken on the responsibility that comes hand-in-hand with farming. 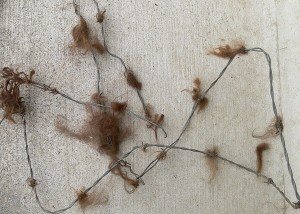 I understand now that farmers in the sixties and seventies, had very little money and certainly none to spare to pay for the disposal of old machinery.  Since many recycling companies now offer to collect and even pay you for your old scrap metal, there is little excuse for keeping the old hulks on the farm, but the fencing is another matter entirely, and I fully appreciate the extensive time it requires to maintain fences, as well as the horrific danger posed to animals, when maintenance is ignored. 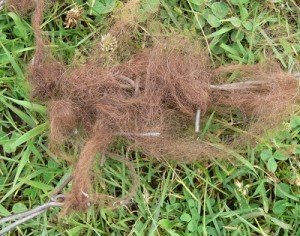 Not once, but twice we have bought an old farm and found it immediately necessary to coil up literally miles of rusting barbed wire , tangled in bushes or half buried in the forest.  Trees and branches fall frequently, often breaking or flattening wire fences.  Even if the land owner no longer keeps animals, the fences must still be maintained or otherwise removed.  Loose, broken or trailing wire is a death trap to all that stray into its mantis-like jaws.  I have seen moose, cows, a bear and llamas wrapped in this wicked stuff and sustained not a few injuries of my own, whilst working with it, including a bout of tetanus.  Wire fencing is very useful, but lethal and make no mistake!

Touché with a thick branch connecting leg to neck

Even after scouring the fields and forest for all remnants of wire, the llamas still manage to find remnants and llamas and wire do not mix well.  It was once common practice to bury rubbish, scrap metal and even cars, but over time, the trash rises to the surface once more and if the animals find it before you do, then disaster can ensue.  On four occasions over the last two months alone, we have had to very carefully, corral and capture llamas who have become wrapped in short coils or offcuts of barbed wire.   Since the animal is usually disturbed by this thing that is attacking them and ‘biting’ their legs, great care is required.  Running is the worst thing possible, so they need to be separated from the herd and lured with oats or treats into a suitable catch-pen.

Armed with gloves, wire cutters and shears, they have to be carefully cut free from the 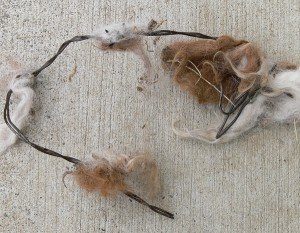 springy grip of the wire. It’s a hazardous task, since llamas and alpacas usually do not like having their legs touched and will kick and struggle.

But, what about the wild animals that we don’t find or that we can’t catch?   I suppose they will go off to die somewhere from blood loss, infection or starvation.  Strangulation on fences is not uncommon with moose and deer.

Please be careful folks!  Even if you don’t keep animals, give consideration to wild creatures,  pick up those scraps of wire and secure the loose or trailing fence wires.  If you don’t need the barbed wire fence anymore, consider removing it or at least keep it maintained and please don’t bury it.  There are enough hazards out there, without man adding yet